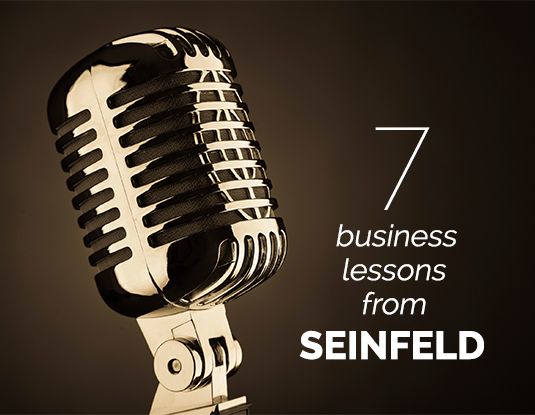 Forget Warren Buffet and Mark Cuban. You could learn a lot about business success from Jerry Seinfeld. Not that there’s anything wrong with that.

We discovered this terrific LinkedIn article about what business leaders could take away from the stand-up comedian behind one of NBC’s most legendary sitcoms. There’s a lot in here about Seinfeld the businessman that you may have never known before. It’s truly worth the read. Here is the article, reprinted in its entirety.

Seinfeld debuted more than 27 years ago under the least promising of circumstances in the television business. Its network, NBC, ordered just one episode and buried it where few were likely to find it: on July 5, 1989, in the dead of summer and the day after a national holiday. But it eked out a tiny season the next year anyway. Then a half a season, then a full season.

After nine years on the air, it had risen to dominate American culture and attract 76 million viewers to its much-hyped finale.

Now, nearly three decades later, it has infiltrated culture more than ever with its omnipresent reruns and streaming episodes. And as of 2015, it had raked in an estimated $3 billion in syndication fees, plus an estimated $160 million from Hulu for streaming rights.

It’s a success story as odd as its cast of characters, one I tell in my book Seinfeldia: How a Show About Nothing Changed Everything. Here, a few of the lessons any business person can learn from Seinfeld’s phenomenal success—rest assured, they’re real, and they’re spectacular.

1. Take opportunities when they’re presented.
Jerry Seinfeld was a successful standup comedian—and perfectly content with that—when NBC approached him with a vague proposition to possibly do a comedy special, or something, with the network. He hadn’t been particularly interested in doing a sitcom, but he took the meeting anyway. He later said, “Seinfeld is something I learned to do because I was given the opportunity. Then the show spiraled off into this whole other entity that I knew I had to serve because it had its own desire to be something.”

2. Respect a good collaboration.
American culture fetishizes the lone artist with a grand vision. But Seinfeld happened because Jerry Seinfeld mentioned NBC’s vague offer to the right friend and colleague: Larry David, a fellow standup comedian. The night Seinfeld told him about it, the two started to riff at a diner after doing the comedy club rounds. Together, they hit upon a seed of what would become Seinfeld: They were funny when they were just riffing with each other about the minutiae of everyday life. What if that were a show? The idea would eventually make them the Lennon and McCartney of sitcoms, David’s edgy darkness balancing Seinfeld’s affable observational humor.

3. There’s always a way.
NBC executive Rick Ludwin, who was in charge of late-night shows and specials, was the one who recruited Seinfeld—and he believed in the show despite its initial poor testing with audiences. After the network buried the pilot episode in the middle of the summer of 1989, he found a creative way to bring it back for a few new episodes the following summer: In his budget, he swapped out one two-hour Bob Hope special for four half-hour Seinfelds. Those four episodes showed ratings promise when they held onto the audience from their lead-in—reruns of the gold-standard in sitcoms of the time, Cheers.

4. Hire the best, then trust them.
As Seinfeld’s cult appeal grew, David and Seinfeld found their creative voice and began to take risks. Late in the show’s 1991 season, two years into its run, David hit NBC executives with an experimental episode: “The Chinese Restaurant,” in which the only plot is no plot. Three of the characters—Elaine, George, and Jerry—wait for a table at a Chinese restaurant, don’t get one, and then leave. It plays out essentially in real time. NBC executives balked at its lack of resemblance to any sitcom ever made before it, but David insisted that this was the show. They ran the episode despite their reservations. Critics loved it. The show was on its way to becoming the rarest of TV breeds, a popular and critical favorite.

5. Surround yourself with talented people who make up for your weaknesses.
Seinfeld has never claimed to be a great actor; he could play himself admirably, but acting was not his main talent. So he hired three of the greatest to play the other main characters: Jason Alexander and Julia Louis-Dreyfus, both comedic and dramatic talents who could imbue the most mundane line with new meaning; and Michael Richards, a true genius of physical comedy.

6. Tie your brand to real-life figures—memorably.
Seinfeld drew heavily from real-life inspiration for characters and plotlines: Kramer was based on co-creator Larry David’s real neighbor, Kenny Kramer. The Soup Nazi referenced a real Manhattan soup place that served up such delicious broth that customers were willing to endure the chef’s strict instructions and beratings. Swashbuckling catalog purveyor J. Peterman was based on catalog purveyor John Peterman. And the list goes on.

This may seem like classic product placement that benefits only the placed products, at least in the case of the latter two. But these figures turn out to be at least as valuable to extending the Seinfeld brand as vice-versa. Kenny Kramer gives bus tours of Manhattan sites featured on the show, thus allowing fans to immerse themselves in Seinfeldia. The Original Soup Man—a stop on Kramer’s tour—has licensed products for grocery stores. The company even recently hired actor Larry Thomas, who played the character on the show, as its spokesman, making itself a never-ending Seinfeldcommercial. The J. Peterman Company continues to sell its wares online, turning the site into the kind of meta-interactive campaign most shows could only dream about. (Fans online often mistake it for an elaborate parody site.)

The trick, of course, is doing this memorably enough for it to work—easier said than done when you’re not comedy geniuses like Larry David and Jerry Seinfeld.

7. Quit while you’re ahead.
Seinfeld’s impeccable instinct told him it was time to stop making Seinfeld with the spring 1998 finale. NBC famously offered him $5 million per episode to keep going, but Seinfeld declined. Fans, most of whom would never see that much money in a lifetime, wondered if he was nuts. But David had left the show two years earlier, making for a crushing workload for Seinfeld and his writing staff. He felt the creative juice running out. And while the $5 million per episode would have meant a lot of money for him, the cost could have been eroding the show’s legacy. Which means Seinfeld might not still be so popular in reruns, and worth us continuing to talk about to this day. If there’s anything Jerry Seinfeld can teach us, it’s how to be master of our domain—and this was a master move if ever there was one.